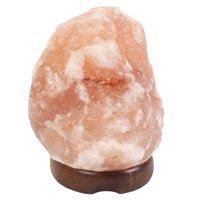 What are Salt Lamps? Salt lamps are large pieces of pure Himalayan Salt with a small bulb inside. They can be solid pieces of salt or decorative baskets filled with large crystals of salt.

The importance of negative ions… Salt lamps are natural negative ion generators. At any given time, there are both positive and negative ions in the air. Negative ions occur more often in nature and they are often created by things like lightning storms, sunlight, waterfalls, and ocean waves. This is one of the reasons people often report feeling renewed or refreshed after a storm or at the beach.

Positive ions are often created by electronic devices like computers, TVs, microwaves, and even vacuum cleaners and can often exacerbate problems like allergies, stress and sleep trouble. Negative ions can neutralize positive ions (they bond together) and help cleanse the air.

The unique combination of salt and a light source in salt lamps are what cause the negative ions. Salt is hygroscopic, meaning that it attracts water to its surface and this water evaporates quickly due to the small amount of heat from the light source (this is also why salt lamps tend to sweat and appear wet in humid climates). The negative ions are generated during the evaporation process.  Since things like airborne mould, bacteria, and allergens often carry a positive charge, they can be neutralized by negative ions.